On February 9, The Fabulous + Beautiful (Branch 281) started their 2017 programme at Lot 88 Art Gallery where they had the pleasure of being surrounded by an exhibition from artist Fleur Cowles, who was a real inspiration to women and started her own magazine in 1950s in the US. Fleur was friends with Dali, Picasso, Cary Grant, Elizabeth Taylor, Marilyn Monroe and many US presidents.

This awesome exhibition was accompanied by Executive Michael Erlik’s Modern Israeli/European menu which combined inspirations from his Israeli roots with Mediterranean influences and his global culinary experience and included dishes such as Avocado Gazpacho Soup with Seasonal Oysters and Argan Oil (paired lovingly with a 2014 Sauvignon Blanc, Foppiano from the Russian River Valley in California) as well as Caramelized Onions filled with Free Range Australian Chicken Braised in Silan with Preserved Lemons and Basmati Pilaf (paired with a 2014 Pinot Noir, Calera from California’s Central Coast). The star of the show – in addition to the art – had to be the Salt Marsh Lamb Loin Pistachio Crust, Thyme Infused Jus Nature, Roasted New Carrots and Fennel Puree – it was simply delicious (paired with a wonderful 2012 Cabernet Sauvignon, Whitehall Lane from the home of Californian wines, Napa Valley). Chef Michael’s Citrus Garden Panna Cotta Orange Blossom Syrup with Candy Zest should not be overlooked, however, and finished off the evening really well (we may have forgotten the calories, but not the taste)! . With more than 20 years of cooking experience internationally, including working at the two Michelin-starred La Belle Otero in Cannes, we can testify to Chef Michael’s culinary skills! 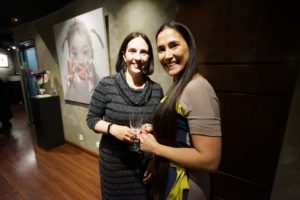 Keri and Tamara, inspect the art over a glass of bubbly!

The group were lucky enough to have their very own Butler – Thomas – who gave us a seamless and professional service (we felt very spolit!). In addition, the gallery’s curator (and guest speaker for the evening), Alexandra Yung, was a formidable and interesting host. She gave us a great insight into her career and her many passions. The F+B left for the evening feeling very satisfied and inspired for the year ahead!

In addition to Chef Michel and Alexandra, the F+B would like to thank Gormei for their partnership of this great event!