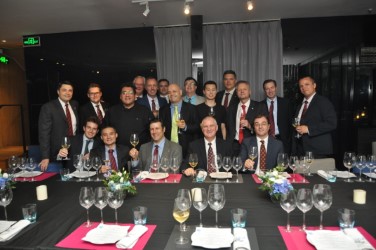 In July the Shanghai Cosmopolitans Club dined at fellow B&B member’s restaurant AZUL – a culinary institution in Shanghai – where Eduardo Vargas demonstrated once more, what great dishes the Peruvian cuisine has to offer and what a fantastic chef he is. The menu is attached – wonderful.

The great evening was highlighted by excellent food, dedicated service and concluded with members enjoying the last bottle of rum from former and missed member Mike McCallus who has moved back to the U.S.

During the dinner members had to say good-bye to two of the longest and most dedicated Shanghai Cosmopolitan B&B members.

Roger Dutton, who has some 25 odd years of B&B membership under his belt and served as a B&B President back in his Beijing times, is moving with his family to New Zealand. Roger was the president of the Beijing B&B chapter in 2000. Members look forward to welcoming him back during his future business visits.

Dirck Lyon, a longtime member of B&B in China has also left, having moved back to the US. Members hope that they might also see him again at their B&B dinners occasionally.