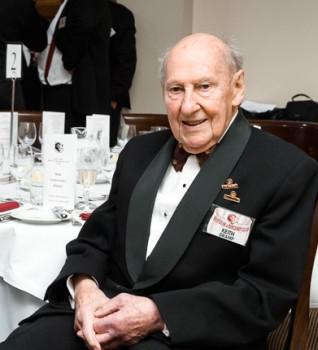 Keith Jasper Gramp or KJ as he is fondly referred to, celebrated 30 years membership of the Adelaide B&B Club in September 2015 and on this special occasion advised that the time had arrived to cease active involvement in club functions.

KJ was born in 1925 the son of Alfred & Minna Gramp of the famous Orlando wine company.

He enjoyed his career in the wine industry and has the distinct honour of being a Life Member of two Beefsteak & Burgundy clubs.

He attended Roseworthy Agricultural College in 1946 & 1947 and then commenced his career with Orlando wines. To prepare him further for the future, Orlando sent him on an international study tour to learn and understand the latest techniques being used in the wine industry.

On his return he married Margaret and together they raised three daughters and a son.

In 1948 he was transferred from the Barossa Valley to Melbourne as Orlando’s Marketing Director with responsibility for Victoria, Tasmania and Southeast Asia.

It was during this time he joined Melbourne Beefsteak and Burgundy Club No.18. He was elected the second President of the club in 1959 and was honoured with Life Membership on 11 November 1974, Life Member No.8

In 1972 he returned to Orlando’s head office in Carrington Street Adelaide where he was appointed Marketin Manager for Australia and later Sales Director.

He retired in 1985, however he continued as a director. The company honoured his retirement in 1988 with the release of 500 dozen bottles of classic aged tawny port designated “Show Port KJ Blend”. The port had won 9 gold medals and 2 trophies between 1980-84.

He joined the Founding Beefsteak & Burgundy Club on 9 September 1985 & was the International President in 1991 & 92. During his Presidency he visited the following countries to meet B&B members: Canada, USA, UK, China, Japan and Sarawak.

He was appointed a Life Member of Adelaide Beefsteak & Burgundy Club on 15 August 2000, Life Member No.326.