I first met Rob and Lucy at the Launceston Convention in 1999 and I remember us having some robust conversations about the food and wine, not to mention the various modes of transport that were offered for everyone to get around.  Rob had been discussing buying a unit on the Gold Coast in which to spend the winter months so I suggested he would be very welcome to attend the Broadbeach Club lunches.

I have records of Rob first attending a lunch at our club in early 2001, although I suspect he may have been to one or two before this date, but in 2002 Rob formally joined Broadbeach as a member while keeping up his Sydney membership.  He and Lucy were regular attendees at the National Conventions and they were very much a part of the numerous and rowdy members of Broadbeach Club at the 50th anniversary convention in Adelaide 2004.

Rob continued to attend about 6 lunches a year, always in the winter/spring months until 2011, when he and Lucy decided that the southern winters were just too cold and they moved up here permanently. From then on, Rob was one of our most regular attendees and contributed much to the fellowship of the club and to everyone’s knowledge of food and wine.

Rob and Lucy fitted right into the Gold Coast lifestyle and they upgraded their first unit to a more modern home in Main Beach. We enjoyed many fine moments with them both, but over the past 3 or 4 years, Lucy’s health deteriorated and just over a year ago, Lucy moved into aged care as she had become too much for Rob to look after as his own health was in jeopardy. But he never failed to visit her every possible day and he had plans to go and do some things in her home the day of his untimely end.

Rob will be sorely missed in the Broadbeach club, and I’m sure by the Sydney Club and the Surfers’ Paradise Club of which he was also a member.

Rob was one of life’s true gentlemen. 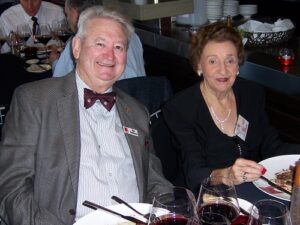