The Duck first made an appearance at a Beefsteak and Burgundy Clubs Convention at Alice Springs in April 2000. At the time I was not particularly impressed as it was “stolen goods”.

As the late Rod Beaumont, Chairman of the previous Convention held at Launceston in 1999 explained, at the end of that convention he was having a refreshing ale, (as you do) in a bar after the rigours of the convention. For company, (as you would) he took along one of the thousand or so wooden ducks he had imported from Indonesia. To his great bewilderment he discovered that during the course of the evening the Duck had disappeared. He was surprised when it turned up at the Sunday lunch in Alice Springs. Perhaps overcome by remorse at committing a theft or just because they were mischievous, the Bathurst Club admitted responsibility and handed the Duck back to Rod. Being the generous man that he was, Rod decided not to accept it but rather compensate John Carter from Illawarra Club. Apparently at Launceston John had slept in on the Sunday, allegedly until 2pm and missed the Sunday activities.

John took good care of the Duck and being a single man, treated the Duck as a companion, naming it “Sozzle” and he brought it across the Tasman Sea with him to the Hamilton, New Zealand Convention in 2001. Having enjoyed the Alice Springs Convention so much, at the Sunday lunch, John passed on the Duck to the Alice Springs ladies, represented by Pat Pawelski and Jill Brooks. At that stage the Duck was decked out in a pretty blue painted jacket.

By the time of the 2002 Convention at Rockhampton the Duck had reached celebrity status. The Alice Springs ladies took it on many trips and kept a photo album of its adventures. That album has disappeared over the years. Apparently the Duck was the cause of some jealousy from another club and it ended up being tossed over a fence and sustained a broken bill, requiring remedial surgery! There was a sea of flashing photograph light bulbs on the Sunday lunch when Pat presented the Duck to Gerry Cahir, a member of the large contingent from Broadbeach.

At the 2004 convention in Adelaide the duck was given to Cobram (our hosts in 1997 for one of the greatest conventions held) member Colin Watson. At that convention it was Colin who had been out early one morning catching yabbies. Colin, one of nature’s noble men was not particularly enamoured of the Duck and I think he would have been quite happy to give it a decent burial. But by now it was an icon and so he refrained.

The 2005 convention at Yarrawonga Mulwala Saturday night gave Rod Beaumont the chance to reminisce a little about the Duck and in view of the passing years bring delegates up to date with its history as well as he could remember. Fortunately, I was able to capture that on video. When unveiled the Duck had a new coat of paint, done out in camouflage worthy of a soldier in battle, or a duck hunter. It was passed on to Wally Holding from Perth.

Not surprisingly by Sydney No7 convention in 2006 it had a new paint job worthy of a West Coast Eagles Australian Rules football club mascot. Richard Martin accepted the Duck for safe keeping on behalf of the Wellington New Zealand Club. Once again it made a journey across the Tasman Sea.

Our hosts for the 2007 convention were the members of Townsville Club and the Wellington contingent presented the Duck to them in recognition of their hospitality. Yes, it had another coat of paint, not surprisingly, the New Zealand All Blacks rugby colours. As Townsville presented the Adelaide Club President, Martin Keith, with a banner to be used at future conventions I thought that it might be a good time to “dump the Duck.” Interestingly, the Duck survives but the banner has disappeared.

Perth hosted the 2008 convention and the Duck, in yet a fresh coat of paint, this time the Townsville Cowboys Rugby colours, was present at Friday night’s function It was not uncommon for the Duck to be “borrowed” during a convention but this time it was not returned.

At Orange in 2009 I must have still been annoyed by the disappearance of the Duck in Perth as I made no mention of it in my records. However, those who had taken it did the right thing and put it in the hands of the Holdfast Bay Club, whose members had distinguished themselves by particularly enjoying the Orange convention.

It was yet another trip across “the duch” as the New Zealanders so quaintly pronounce it for the 2010 convention at Wellington. Holdfast Bay had treated the Duck like an adopted son and it had an adventurous time accompanying them on their outings including a dinner in the Bradman Room at the Adelaide Oval. Being a refined lot they had done away with football code painting and had the Duck depicted in formal evening wear carrying a case marked Penfolds Grange. They had prepared a slide show featuring its activities. The Duck was passed on to Max Bourne from Toowoomba Wheatsheaf Club.

2012 brings us up to date and Max brought the Duck on another stage of its travels to Darwin and it is now in the hands of Peter Bennett, Chairman of the Yarrawonga Mulwala Club, hosts for the 2013 convention. It was pleasing to see that the Duck was still in its gentleman’s livery. 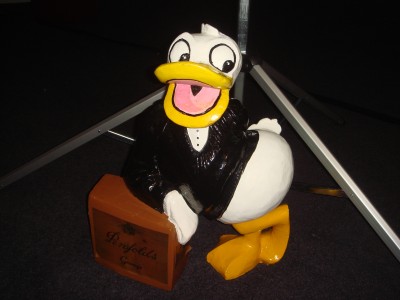 After all these years I have come round to enjoying the Duck and its contribution to our Conventions. Rod Beaumont, so full of life but struck down in his prime by cancer would have been pleased. It is a worthy memorial as a simple thing which brings pleasure to others.