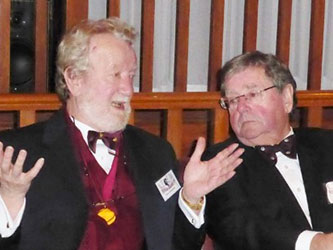 The wine man, cellar advisor guru and long time member, Craig Willson, handed me an interesting document from 1955. At that time Pig Iron Bob Menzies was Prime Minister and Thomas Playford IV was the South Australian Premier. Malcolm Fraser entered politics, England won the Ashes series 3-1 and Port Adelaide won the SANFL Premiership in that year. Greg Norman and Allan Border were both 1955 babies and the population of South Australia was 819,729. It was on St. Valentine’s Day of this year [February 14th.] that the committee of the Adelaide B&B Club met at Tintara House. Like the Holden of the time, uncomplicated and with more head room than a coffin, so the minutes of that meeting were in much the same manner [simple and not demanding], unlike those of recent times. B&B life was much simpler then. Here is a verbatim transcript of those minutes.

Present: Messrs. G. Fairbrother, R.D. Clark, R.D. Crosby, J.J. Edwards and S.R. Drew.
Apologies: Messrs T.W. Hardy, R.W. Clampett.
Chairman: Mr G. Fairbrother was elected Chairman.
Minutes: Minutes of previous meeting held on 10th January were read and signed as a correct record.
New Members: Application forms duly completed from Messrs. R.K. Howie, C. Millard and R.E. Alexander were tabled and accepted. It was resolved that all be elected members of the Club.
Luncheon: It was resolved that the next luncheon be held at the Imperial Hotel, Adelaide, on Monday 14th March 1955.
Secretary’s Expenses: Reimbursement of 1 pound for tips paid by the Secretary at the February luncheon was approved.

This document was signed as a correct record by R.W, Clampett on March 21st 1955.

Nice touch with the reimbursement of the pound tip. Notice also second Mondays are the go for lunches. No Treasurer’s report, ah Holden days. Interestingly the first Annual Dinner of the Beefsteak and Burgundy Club was in 1955 also at the Imperial Hotel and partners were present. Two toasts, both proposed by the Club President, Mr Tom Hardy, were to “The Queen” and “The Ladies”. Artist George Picazzi [no relation to Picasso] drew caricatures of guests during the dinner. [some pictures of this function are available. Ed.]

Move forward nearly 50 years to May 21st 2004 to the opening of the Convention celebrating the Club’s 50th Anniversary. A perusal of the opening address by co-founder of the Club, David Crosby, is fascinating. Craig Thornquest was the then President. This address throws up some insights as to the origins of our Club.

David explained that the reason for the ongoing success of B&B is highlighted by the shortcomings of the Bacchus Club which was also operating in the 1950s. The large membership of Bacchus limited the number of suitable venues and limited opportunities for all members to take part. Not criticisms of an excellent club but simply a comment on how these situations could be improved. As a result of discussions with Dick Clark [co-founder] B&B was restricted to 30 members in order to encourage all members to stand for various offices and to contribute actively to the ongoing interest in the Club. Other notable key elements, still extant today, were a simple constitution, objectives to encourage good fellowship and an appreciation and understanding of good food and wine in a temperate setting. “Temperate” was treated with poetic license, on occasions, according to David.

David Crosby then proceeds to mention a number who were quick out of the gate and who strode across the B&B landscape with the derring-do of western gunfighters, but with the consideration of intensive care specialists. These men played significant roles in the development of our Club. He mentions Sir James Hardy, his brother Tom Hardy, Dick Clark, George Fairbrother, who was the first Wine Master, Ray Drew, first Secretary, Davis Cleland, first Auditor, Bob Clampett, who later became Lord Mayor of Adelaide. Others to draw praise were Jack Edwards, first eight, Peter Cotton, of Gillingham Printers, who was responsible for most of the Club’s printed material. Eric Sim, Jack Ludbrook, official scribe and Eric Ring who was responsible for the design of the Club motif, Club ties, cufflinks, wine coasters, serviettes and many other items.

This list of notables continues with Tom Partridge, John Robson and Jack Townsend, all competent Wine Masters. Special mention is made of Keith Gramp who kindly provided room in the Adelaide offices of Orlando and for the many wines provided for AGMs. Keith also visited 7 overseas Clubs and presented 2 of these with their Charters. Others to be mentioned in this prestigious line-up are Bruce Thompson, Rod Martindale, Toby Clay, our first General Secretary, the tireless Bill Dand and Tony Cross, who served as President for 3 years. Interestingly Rod Martindale was President in 1980 and his son, Peter was President in 1985.

This document highlights much about our Club’s history, but more of this next month. As Paul Kershaw always says, ” Our Club, like wine, improves with age. The older I get the more I enjoy it.”