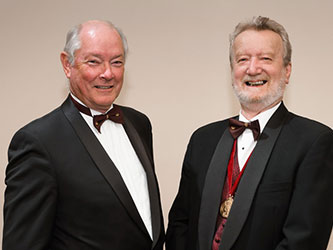 Paul joined B&B in 1993, was elected to the committee in 2006 and is still serving in the capacity of Immediate Past President.

He has contributed to the club in many ways. He has

He has attended Conventions in Yarrawonga Mulwala and Adelaide.

Brian joined the club in 2003, being nominated by former President and Life Member, Phil Kleinig. He served on the Committee for nine years, from 2007 to 2013, being International President 2011/2012.

In 2014 he chaired the Tri Club Convention (Brighton, Lockleys, Burnside) in Adelaide to celebrate the movements 60th year.

He has been Auditor of the International and Adelaide Social Club Accounts since 2014.

Both awards were resolve unanimously by the International Board