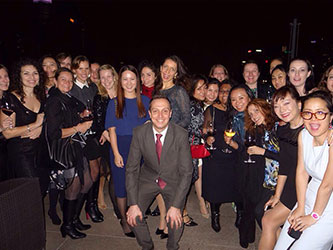 Club #277, the Shanghai Belles, ended 2016 with a big bang: at the two-Michelin-starred Otto e Mezzo Bombana at the iconic Shanghai Bund.

This restaurant is one of Shanghai’s best-known destinations for high-end Italian cuisine and is helmed by Sicilian Executive Chef La Perna.

The evening started with stand-up aperitifs (Mionetto, Valdobbiadene Extra Dry DOCG) at the beautifully-lit bar and continued with a carefully selected cold cuts selection served at the tables accompanied by Roca delle Macie, Chianti Classico Reserve DOCG. The ladies then enjoyed the refined marinated Hokkaido scallops with Cusumano, Alta Mora Bianco 2015, while taking in the beautiful views over the Shanghai Bund and the funky Pearl Tower fr 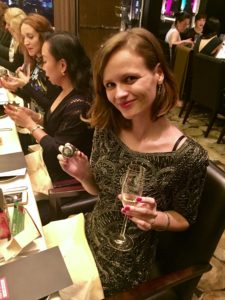 om their tables. 28 ladies of 12 nationalities were especially delighted by the homemade tagliolini, smothered by the delicate fresh white truffle flown in from Alba and shaved on the spot by the amiable chef la Perna. This dish was expertly paired with Grattamacco, Bolgheri Rosso DOC.

The queen of the evening was surely the flavourful and elegant Australian beef striploin, which resulted in a pairing from heaven with the Umano Ronchi, Pelago Marche Rosso IGT 2010. Another round of utmost indulgence started with the pre-dessert: almond foam and pistachio gelato culminating with the berries semifreddo millefoglie accompanied by Nino Franco, Faive. While the food and wine pairings were discussed with the chef and our wine team, classic Sicilian pastries were served.

During the dinner, the President of the Club, Marina Kramer, reminisced about the past year and announced the restaurant winners of the annual awards, which will be made public this February. Every guest at the dinner received a custom-made Christmas present by the Club: a bottle-stopper engraved with the logo of the Club and the Club’s number. 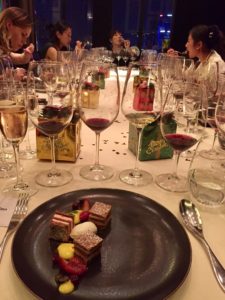 Our annual Christmas Raffle included bottles of wine, restaurant vouchers, deli & grocery vouchers, olive oil etc. all thanks to our generous sponsors: The Apartment, Food for Thought, Käfer, Fields, Nicholson Butchery, Maison Traiteur, Fields, Nuria etc. It was a night to remember, not just thanks to the fantastic setting and treats, but mostly because of the hard expert work of our Food (Jacqueilen Brussee, Annclothilde Bernhardt) & Wine Masters (Laurianne Gidrol, Suzette Xu), as well as the rest of the team (Secretary Corina Miltenburg, Treasurer Mia Hunter, PR Angelika Dausch). What an impressive end to a spectacular year!