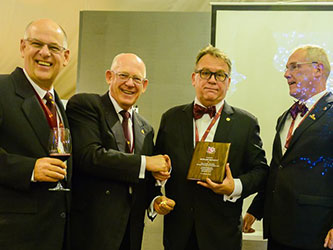 Award recognises an enormous contribution to Beefsteak and Burgundy

A highlight of the Saturday evening Galah Dinner was the presentation of Life Membership to Howard Bennett.

Howard took on the role of Chair of the 2015 Convention following a period as the Founding President of the Shanghailanders Club. Prior to this Howard had been a member of a number of clubs in the Asian region and was the founding president of several.

His contribution to B&B has been significant over many years and his energy in promoting and supporting the objectives of B&B untiring.

Congratulations to the club members in keeping it a surprise!!

L to R in the above photo are General Secretary Criag Thornquest,.International President Bruce Perks, Howard Bennett, and President of the Shanghailanders Club Hanns Michel