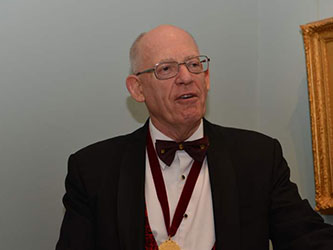 Minutes of the Business Session held at 8.30am in the Torquay Room on board P&O Cruise ship Pacific Eden on Saturday 25 March, 2017

The meeting was opened by President Bruce Perks at 8.35am.

Attendance: 100 members and guests were present.

MINUTES OF THE 2016 BUSINESS SESSION

The previous minutes held on Saturday 21 May, 2016 at Hadley’s Hotel, Hobart, Tasmania were circulated.

The President welcomed delegates to a different Convention nicknamed “aB&B@c”.

Powers of the Convention

The President reminded delegates that the meeting was an exchange of views and comments which would be considered by the Committee.

The President presented Jim Freebairn, Past President of Nital Club, Victoria with a plaque acknowledging his contribution to the Beefsteak and Burgundy movement by providing critiques of the past 25 sequential conventions.

* The President thanked Tim and Gaye Fischer (Woodville, SA) for conceiving the idea of a convention on a cruise ship and for organizing this along with the Woodville Club Convention Committee. Almost 50% of the delegates had never previously attended a convention. He asked if delegates could complete a questionnaire to ascertain if another convention at sea is desirable.

* There are 183 affiliated clubs worldwide; in every Australian state and territory, 10 clubs in New Zealand and more than 10 clubs in Asia, the Americas, Europe and South Africa.

* The Adelaide Club is thriving and it is actively trying to attract and retain younger members to reduce the age profile of the club. Other clubs need to focus on reducing their age profile or risk their club’s demise. A minute’s silence was held for deceased past Beefsteak and Burgundy Club members. Careful mentoring by the Adelaide Club committee is ensuring that the succession planning for the committee’s future is fulfilled.

* The President hoped that there will be many more international conventions in the future and asked clubs to consider hosting a convention. The next convention will be hosted by Black Swans and Coonawarra Clubs’ in November, 2018. The Adelaide Club will host the 2024 convention coinciding with the 70th Anniversary of Beefsteak and Burgundy.

* As reported at the Hobart Convention, a book on the history of Beefsteak and Burgundy is being coordinated by Vin Thomas. Vin reported that 50 pages have been completed. He asked that individual clubs work on their own history for inclusion in the book.

* The data base of Life Members held by the Foundation club may have several omissions and the President asked that clubs advise the General Secretary of their recorded life members.

* The President thanked the General Secretary Craig Thornquest for his exemplary support to Clubs and the general membership.

This year more clubs have taken up the free email offer and the General Secretary urged more clubs to use the generic email rather than personal email accounts.

The transition of the website to ‘wordpress’ has been successful. The website is continually changing with an aim to increase marketing and brand recognition. The General Secretary reminded Club secretaries to complete their club and committee details online for the 2017 year so that the handbook can be completed.

The General Secretary suggested that clubs should encourage younger members to ensure their club’s future. Many clubs are marketing themselves as ‘self development’ or public speaking clubs to younger prospective members or fast tracking young members into positions of responsibility.

This is designed to seek responses to gauge popularity of future conventions at sea.

The General Secretary advised that 2017/18 affiliation fees will increase by $5.00 per year. Australian club annual affiliation fee will be $375.00 and $195.00 for overseas clubs. Club Secretaries were reminded to make payment and update branch details online as soon as possible after their AGM. Also ensure that the Club name is included with cheque payments or electronic funds transfer.

The General Secretary asked that the regalia form on the website be completed followed by payment by cheque or EFT. Secure website payments are being investigated.

The General Secretary read out the names of 36 members who obtained Life Membership during the past year. The requirements for awarding life memberships are on the website.

Clubs which celebrated during the year since the last convention were:

2018- Coonawarra South Australia. The convention will be hosted jointly by clubs Black Swans and Coonawarra. Rick Paltridge and Wendy Hollick made an excellent presentation with a video for the convention to be held on 9-11 November, 2018.

2020 -The General Secretary reported that a business plan and budget had been received from Fortitude and Blumers Clubs in Brisbane for the 2020 convention. Caroline Balfe (Blumers, Qld) spoke briefly on the proposed convention.

2024-Adelaide Foundation Club will host the convention in Adelaide to coincide with the 70th Anniversary of Beefsteak and Burgundy.

* Adrian Lee (Botany Bay, NSW) spoke on the success of their clubs visit to McLaren Vale where they invited members of the local McLaren Vale Club to join them for a dinner.

Delegates adjourned for a “Welcome Meet and Greet” and group photo in The Dome (Forward deck 11).